The Eve of Eleven

He retrieves it from the foamy edge of the sea, the very place where the last wave left its fleeting imprint. 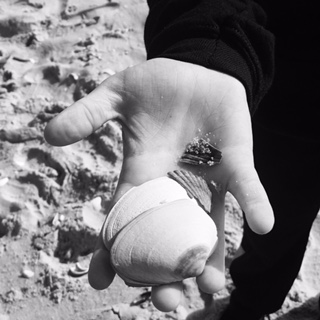 Among the cracked remains of chalky clamshells, he spots an elusive scallop shell.  Every childhood summer, he inspects the ocean rubble in search for one.  Year after year, his sandy footprints have deepened and widened under his growing frame on that familiar path.  Vestiges of his boyhood slowly sink into adolescence, as the timbre of his raspy voice lengthens.  Despite the abandonment of cartoons, Superman T-shirts, and kids' menus, his hope of pilfering a jackpot shell has remained intact.

He hurries away, grappling his younger brother's birdlike legs in an impromptu football game.  Both land in a hillock of beach, their voices clashing with the rhythmic songs of the ocean.  It is the unlikely dance of grace and chaos set to the most discordant of melodies.

Here we are--the eve of eleven--his size five feet treading through the damp November sand. Unexpected is the late autumn afternoon in the northeast where deadened, tired leaves dismount in summer-like warmth.  Rotting jack-o'-lanterns and strewn fun-size Milky Way wrappers seem unnatural on this fall day at the beach.  As the waves crash, autumn somehow surrenders itself to the here and now.

"It's beautiful! I love it!"  I gush, prizing the shell as a calcified symbol of our bond.  Cupping the shell into my palm, I feel its perfectly-spaced ridges under the heat of my own fingers.

I imagine this shell--once hinged to its other half--protecting what once lived inside of it.

I imagine it again:  its halves pried apart, all its living bits set adrift in uncertain, surging waters.


But it's the jackpot's sturdy ribs that distract me the most.  The thick, raised grooves that allow rivulets to move through it and help it to burrow from the surrounding dangers.

Here we are--the eve of eleven--as I watch him methodically unhinge himself from the child he was only yesterday.

Suddenly, I edge closer to that dreaded precipice of motherhood:  letting go.

Under this unforeseen November sky, I am painfully aware of the cleft in my own protective shell, the one that will eventually fissure out into each cracking ridge.

Detachment, after all, is the inevitable clause of motherhood.

The hardest part is watching the missteps and mistakes as he learns to iron out the wrinkles of adolescence that stretch before him.

I again imagine that halved shell as it churns in the drowning salts of anxiety and sorrow, only to have a forgiving ocean return it to its newfound place.

It is on the eve of eleven that I remind myself that the shell will always make it back.

To my waiting hands.